Previous vaccines and masks may hold down COVID-19, some researchers say 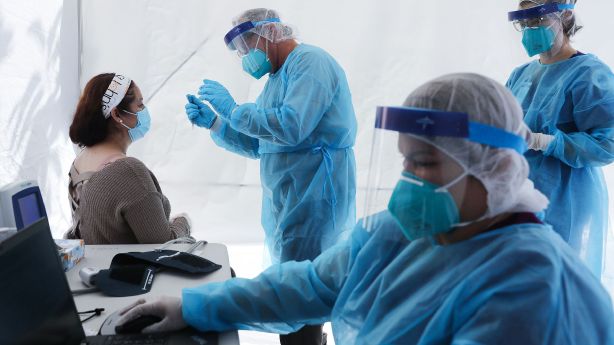 ATLANTA (CNN) – As US leaders work to control the spread of the coronavirus, researchers across the globe are working to answer the mysteries that remain about infections.

One of those mysteries: why the experience can be so different from person to person. One expert says the answer may include looking at previous vaccines that individuals have had.

“When we looked at the setting of COVID disease, we found that people who had previous vaccinations with a variety of vaccines – for pneumococcus, influenza, hepatitis and others – seemed to have a lower risk of getting COVID disease,” said Dr. Andrew Badley, an infectious disease specialist at the Mayo Clinic, told CNN Anderson Cooper on Monday night.

“A good analogy is to think of your immune system as a muscle,”

; he said. “The more you exercise that muscle, the stronger it will be when you need it.”

There is no conclusive evidence for any other immunization-enhancing vaccine against COVID-19. But some researchers have suggested it is possible.

In June, a team of researchers in the U.S. proposed giving a booster dose of the measles, mumps and rubella vaccine (MMR) to see if it helps prevent the more severe effects of coronavirus infections. And last month, researchers found that countries where many people were given the Bacillus Calmette-Guerin (BCG) tuberculosis vaccine had lower mortality from the coronavirus, a finding consistent with other research suggesting the vaccine could boost people’s immunity. in general.

But once you are infected, how much of the virus made it into your body can also affect what your experience is, another expert told CNN on Monday.

Dr. Monica Gandhi, an infectious disease specialist at the University of California, San Francisco, has been working with a team of researchers to understand how more people could go through their infections with minimal or no symptoms. About 40% of people infected with the virus have no symptoms, according to an estimate last month by the U.S. Centers for Disease Control and Prevention.

The Gandhi team that found the masks makes a difference.

“What makes the mask really is the reduction in the amount of virus you get, if you get infected,” she said. “And by reducing it … you have a lower dose, you are able to manage it, you are able to have a calm response and you have mild symptoms or no symptoms at all.”

“We have nothing to celebrate” about the levels of current issues, the doctor says

To date, more than 5 million Americans have tested positive for the virus and at least 164,000 have died, according to Johns Hopkins University data.

However, the average daily deaths of COVID-19, however, have reached over 1,000 in more than two weeks. The country had been below that level for seven weeks in a row before that.

“We have nothing to celebrate (simply) because we are going to go to 50,000 cases a day. We have a huge amount of morbidity and mortality on our feet now and in the coming weeks,” says Dr. Rochelle Walensky, chief infectious disease officer at Massachusetts General Hospital, said Tuesday.

Study: Many Americans were not infected due to distancing orders

Up to 80% of Americans would have been infected with COVID-19 if states had not implemented physical distancing policies, according to a recently published modeling study.

Researchers from Harvard University and University College London found that every state in the US spent at least one distance physical mass in March to slow the spread of the pandemic.

The policies resulted in the reduction of more than 600,000 cases within just three weeks, according to the study published Tuesday in the journal PLOS.

“The results show the timing of government-issued orders that are strongly linked to reductions in both cases and deaths. In short, these measures work, and policymakers need to use them as an arrow in their quivers to “reached the top of local epidemics where they are not responding to control measures,” said Dr. Mark J. Siedner, a study co-author from Harvard Medical School and a doctor of infectious diseases at Massachusetts General Hospital.

The death rate dropped by 2% per day starting a week after starting a physical distance policy, the study says.

Cases with speaker in nursing homes due to community spread, the group says

COVID-19 cases rose rapidly in U.S. nursing homes in July after a steady decline in June – signaling a serious risk to a particularly vulnerable group of people, a health organization said on Tuesday.

The dumping in nursing homes was due to a general spike in cases in the general population, and it should prompt the U.S. government to take steps to protect homes, said the American Association of Health Care and National Assisted Living Center .

New weekly COVID-19 cases in nursing homes fell from 9,072 at the end of May to 5,468 by June 21 – but then rose to 8,628 for the week of July 19, the last week for which data are available , said the group. The group cited data collected by the Centers for Medicare & Medicaid Services.

The report said this confirmed the group’s fears: That cases would increase in nursing homes as they stood out in the wider community across the country from June to July.