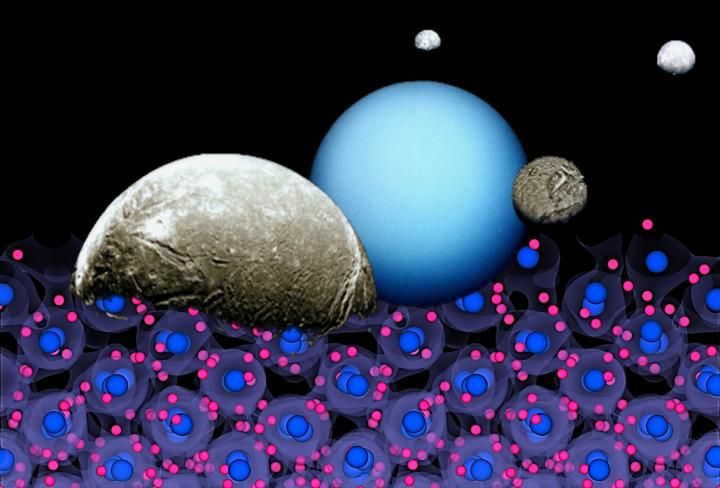 Researchers are investigating an alien version of water inside strange, icy interiors Uranus and Neptune.

In a new study, scientists have created a theoretical computer model and used it to look inside the ice giants Uranus and Neptune. With this tool, the team studied the thermal and electrical conductivity of unusual water within these planets. In simulating these physical processes in the atomic scale of adolescence, researchers hope that this new model will reveal information about the internal structure of icy bodies. magnetic fields, how they evolved and exactly how old they are.

In studying Uranus and Neptune with this model, researchers from the International School for Advanced Study (SISSA) in Trieste, Italy, and the University of California, Los Angeles, estimated that the two planets are likely to be composed mostly of water. in some form and Uranus may even have a frozen core, according to a SISSA statement.

Related: How was Uranus created?

“Hydrogen and oxygen are the most common elements in the Universe, along with helium. It is easy to determine that water is one of the key constituents of many celestial bodies,”

; the researchers said in the same statement.

The team looked at three different phases of water that may exist in these interplanetary spaces: ice, liquid, and superionic (superionic water exists at extremely high temperatures and pressures.) But, as the researchers explained in the statement, water in (and within ) an alien planet is much different from water earth.

“In such exotic physical conditions, we can not think of ice as we are used to,” study professors and co-authors Federico Grasselli and Stefano Baroni said in the statement. “Even water is actually different, denser, with several molecules separated into positive and negative ions, thus carrying an electric charge. Superion water lies somewhere between liquid and solid phases.”

So what did they discover about the water inside these ice giants? The researchers hypothesize, they explained in the statement, that Uranus may actually have a frozen nucleus. That would explain why the planet is not very bright, as a frozen nucleus meant very little heat would move toward the planet’s surface, according to the statement.

Scientists also discovered that superionic water on Uranus and Neptune is more electrically conductive than water on Earth, and they think that superionic water could make up a large portion of the dense inner layers of these gas giants. These results further our understanding of how the two bodies are composed and how they were made, the study suggests.

As both scientists said in the statement, “Thermal and electrical conduction dictates a” history of the planet, as well as when it formed, how it cools. That is why it is essential that we analyze them with the right tools, like the one we have developed. “

it the work was published on July 17th in the journal Nature Communications.